“Volcanoes”, a word which people immediately relate in their mind as fiery mountain releasing red hot lava and immense heat. It just reminds that there was a time in the life of the earth when it was just a ball of hot molten rock which had no capability of supporting life. But as the earth cooled down and the warm waters gave rise to life which evolved into the living beings we see all around us today. But not only are they so exotic, they are like scars on the face of the earth which reveal its insides, great depths which remains yet to reach. Volcanoes have a lot to offer in the study of the composition and behavior of the earth at extremely high pressures and temperatures. 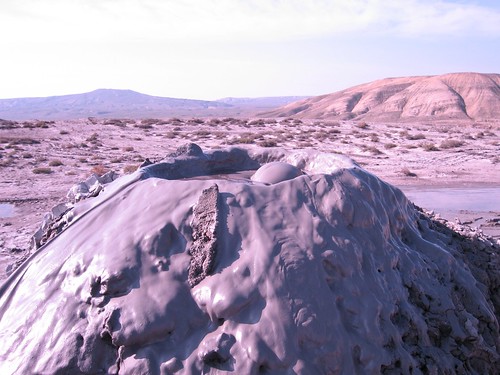 The lesser recognized cousins of the magmatic volcanoes, the “Mud Volcanoes” (which are also sometimes referred to as “Sedimentary Volcanoes” or “Gas-Oil Volcanoes”) are much similar to the magmatic volcanoes by having the same capabilities of hurling out dense gases high into the sky. They have similar geographic locations and similar capabilities of changing the topography of its surroundings. They can be found on sea beds, expel can form islands and these can also cause earthquakes. Actually the most interesting feature of mud volcanoes is that their presence is a direct indication of a sink of hydrocarbons beneath them or in general terms, “Oil Wells”. In this article we will look into the interesting marvel of nature, what it is, how it is born and its many fascinating features

Where are they found?

There are nearly 700 known mud volcanoes on earth (excluding the ones in water and undiscovered) out of which 300 are found in Eastern Azerbaijan and on the shores of the Caspian Sea. Probably the most famous mud volcanoes in the world are found in the Gobustan State reserve in Azerbaijan.

In Europe they are found in the Kerch Peninsula in Southern Ukraine, Sicily in Italy, but the ones accessible to tourists and observers is located in Romania near the Carpathians.

In Asia, they are found between the mountain ranges between Iran and Pakistan, the western Uyghur province of China, The Andaman Islands and South Taiwan.

In the Americas, ground mud volcanoes are found in the Wrangell mountain ranges in Alaska, California, Southern Trinidad, Eastern Venezuela and Columbia.

Interesting Fact: The cows of the Venezuelan Savanna often lick the dried mud from the mud volcanoes for its rich salt content which is primary component of their diet.

What are Mud Volcanoes?

Mud volcanos are basically vents on the floor of the earth to let out pressurized gases trapped at great depths in the earth’s crust along with mineral rich water and traces of oil which also forces up all the mud in its path, hence keeping true to its name. This spews out mud piling upon itself to form a dune shaped feature on the earth’s surface. These hilltops can range from 5 to 500 meters in height.

Interesting Fact: The release of gases by the mud volcanoes can be lightly understood as the earth’s excretion, since 86% percent of release contains methane (the main ingredient of flatulence which gives it its smell). A set of nose plugs may be important for those with sensitive to smell.

As far as the similarities go between the magmatic volcanoes and the mud volcanoes, it ceases at the part where they both can release stuff trapped deep in the surface of the earth, out into the land. From there on they are quite dissimilar as unlike their celebrity cousins, do not release molten rock or more importantly enormous amounts of heat energy into the atmosphere.

Interesting fact: On the contrary, these mud volcanoes usually maintain a moderate to even a cool temperature making them a tourist hot spot for therapeutic mud baths which are known to reduce stress and get rid of wrinkles while also giving a bright glow to the skin.

Structure and Composition of Mud Volcanoes

Mud volcanoes usually don’t have any distinct shapes unlike the magmatic volcanoes, they just pile up over the terrain surrounding them. They can be classified based on the shape in which their active domes fall into, Gryphons (cones) and Salses (pools). These volcanoes may be wet or dry in nature. Although they don’t reach high altitudes, they can spread kilometers apart in all directions. The world’s largest mud volcanoes Boyuk Khanizadagh and Turaghai both of which are located in Azerbaijan.

The mud from the mud volcanoes usually contain clays, sands soaked in oil, lime fragments, sand stones, and to some extent gypsum. The color of the mud volcanoes depend upon the concentrations of the different hydrocarbons present. It mostly gives it a greyish to a purple blue. When it is dry, it inherits the white color from the salts.

Mud volcanoes usually occur away from the populated areas. Volcanic eruptions from mud volcanoes are generally not devastating. However they are known to cause some causalities and even rare occurrences of life loss. Mud volcanoes have been known to wipe out small villages and towns but not to any great catastrophic measures unless until disturbed by mankind.

Interesting Fact: There is an active legend which says that an eruption from a mud volcano the disappearance of an entire settlement known as the ‘Old Gliady’ in the 15th century.

Whenever man disturbs nature, the result is not always that pretty. Human activities such as drilling and mining without a proper topographic and seismic study of the area may cause disturbing results.

About seven years back in Indonesia, a hybrid volcano (thermal/ mud) emerged on the Java Island which spewed out 10 square kilometers of material outside, making the surrounding area inhabitable. Nearly 11,000 people were displaced from their homes. All this was caused by a gas pocket which was hit during a drilling operation.

Despite the perils of these magnificent oddities of nature, they do have more profit than loss. As much as the capability they have for destroying, they definitely make up for it in its rejuvenating and therapeutic features. Especially the mud volcanoes of Azerbaijan, with their ambient temperature (sometimes cooler) attracts locals, tourists, and even geologists to take mud baths in these natural beauty spas.

The mud volcanoes of Azerbaijan and its surrounding also hold a rich historical significance, filled with rock carvings, the volcanoes themselves and also a musical rock in the region called the ‘Gaval Dash’ which is only found in Azerbaijan (Gobustan state reserve) which is a large flat stoneformed by three supports and produces a tambourine like sound when it is struck.

The mud volcanoes are just a part of the large package of what our amazing planet has to offer its beings. These amazing oddity of nature deserves more recognition than it gets, as it can give us an internal mapping of the earth’s greater depths. It is also a sign of the presence of Oil, which can be utilized to refine to make various products.